Leave us a message.

We have a great pleasure to introduce you to our new Ph.D. student – Anna Kościelniak. Previously Anna worked in our group as a technical assistant and she is now pursuing her Ph.D. within our Team. In her work, she will focus on the biochemical and structural characterization of the regulatory proteins of the Elongator complex.

Here is what Anna wants us to know about herself.

My affiliation with Max Planck Research Group has started in 2017. I joined the team of Dr. Monika Gaik in Polonez grant and I supported the project as a technician. The aim of the project was to obtain a novel protein complex involved in regulation of stem cells differentiation during fly oogenesis and to investigate its three-dimensional architecture and interactions within the complexes. During almost two years I had an opportunity to participate in establishment of two new to the lab expression systems such as Bicistronic Yeast Expression System and Baculovirus Expression Vector System. Both of them are being used for protein expression in many other projects until today and they allow investigation of proteins and protein complexes impossible to obtain in bacteria expression system.

Our work inspired us to share the passion for science and biology with the youngest scientists. In 2017, as part of the science popularization initiative, we started our collaboration with Children’s University Foundation, where I had been working as a volunteer during my studies. We organized the first workshops for 10-11 years old children.  Our effort was appreciated by the participants, thus we were awarded with the prize for the best workshops in Kraków. This event was a beginning of another collaboration with Children’s University of Wadowice. In summary, with help of our PhD and Master Students, we conducted 4 cycles of workshops for more than thousand kids until SARS-CoV-2 pandemic ruined our plans. We all hope that in the nearest future we will be able to continue this exciting and full of joy program, allowing more children to learn in practice about the code of life and the significance of proteins.

After the Polonez project was finished I focused on the insect cells management and coordination of protein expression in this expression system. In the meantime, the Gibson Assembly cloning method was established in our lab, for obtaining many proteins from one expression vector in insect cells. I used it to express full Elongator complex that consists of 2 copies of 6 subunits (Elp1-6). The primary function of Elongator is to catalyze tRNA modifications in the wobble base position of an anticodon loop. This multi-stage process involves tRNA recognition, binding, and acetylation of its anticodon uridine at position 34 (U34) that enables further methylation and thiolation by other modification partners. This modification pathway is the main interest of Glatt-lab Team and many details in this field were revealed here so far.

Being involved in various projects and gaining experience in the field of molecular biology I was inspired to start my own scientific career and apply for a PhD position. The aim of my project is to biochemically and structurally characterize the Elongator’s function regulation and its regulatory proteins’ interplay. These discoveries could lead to the design of therapies against many still incurable diseases. In this study I will use the state-of-the-art method in structural biology, which is Cryogenic Electron Microscopy, to obtain the structure of Elongator together with its regulatory proteins. I found it very interesting to visualize the interaction between proteins, as they work as a complex biomachinery.

A practical and factual approach is something that I learned during my Biomedical Engineering studies at AGH University of Science and Technology in Kraków. I obtained my Master’s degree in the field of Bionanotechnology, completing the Master thesis at the Department of Biophysics at the FBBB of Jagiellonian University under the supervision of dr hab. Anna Pawlak, who on the other hand showed me the world of pure science. I studied a light-induced generation of reactive oxygen species by an oxidized retinal lipids to investigate their potential phototoxicity. This was also the place where I found out about the MCB and decided to apply for a job, to get familiar with the field of molecular biology, which I was always intrigued by.

I am very happy to have an opportunity to do my PhD in such a dynamically developing institution, in the group of full of passionate scientists from all over the world and in one of the most fascinating field of science, which is molecular biology. I am sure that the PhD studies will be a great, incredibly interesting journey that expands horizons and open door for future challenges.

Good luck with your experiments Anna, we are happy to have you with us! 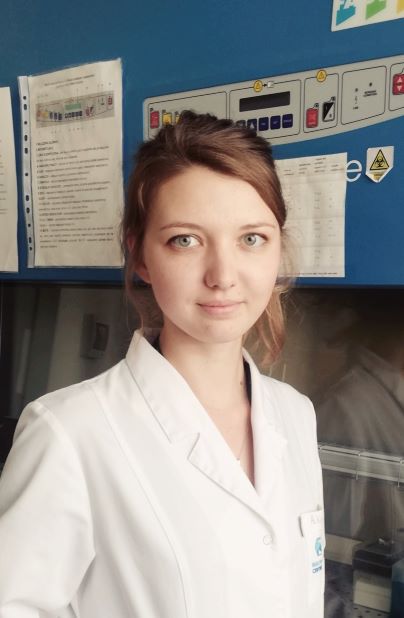