Leave us a message.

A team of scientists from the Małopolska Centre of Biotechnology (MCB) at the Jagiellonian University (Kraków, Poland) has identified a potential link between tRNA modifications and the biosynthesis of selenocysteine, the 21st naturally occurring amino acid. In detail, their article published last week in the Nucleic Acid Research sheds light on Kti12, a protein involved in the regulation of the tRNA modification by the highly conserved Elongator complex.

Together with several German research groups from Kassel, Halle, and Mainz and a team from Great Britain, the Max Planck Research Group at MCB led by Dr. Sebastian Glatt dissected the three-dimensional structure and cellular function of the previously weakly characterized Kti12 protein. They managed to crystallize its catalytic domain by using a biochemical trick that locked the protein in a specific transition state of its reaction cycle. Unexpectedly, the structure of Kti12 appears to be very similar to a well-known protein involved in the selenocysteine biosynthesis pathway. “The similarities with the selenocysteine pathway turned out to be much deeper than expected since Kti12 is also specifically activated by the tRNA that encodes selenocysteine” explains the lead author Rościsław Krutyhołowa. Interestingly, the study also shows that Kti12 is important for the proper activation of Elongator, which is known to modify the tRNA for selenocysteine that itself activates Kti12. Thanks to the small chemical modifications provided by the Elongator complex, cells are able to produce properly folded proteins and circumvent neurodegenerative diseases and cancer. The published study provides molecular insights into the regulatory networks that control Elongator. Therefore, the results also improve our mechanistic understanding of related diseases and potentially pave the way for novel diagnostics or targeted therapies for the benefit of the patients.

The study was supported by an OPUS grant from the National Science Centre and strongly facilitated by the excellent scientific equipment located in the Structural Biology Core Facility at MCB. 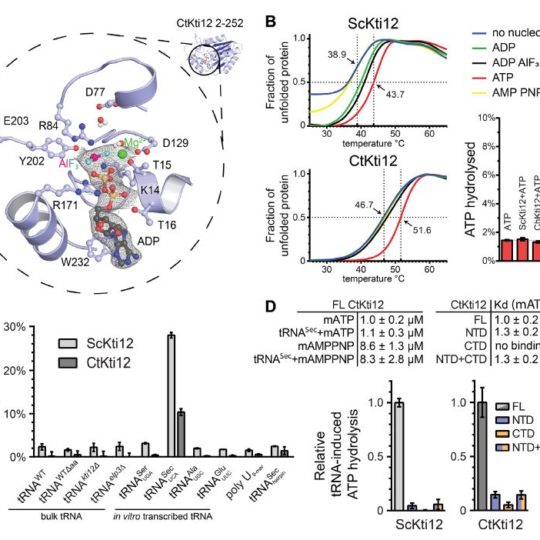